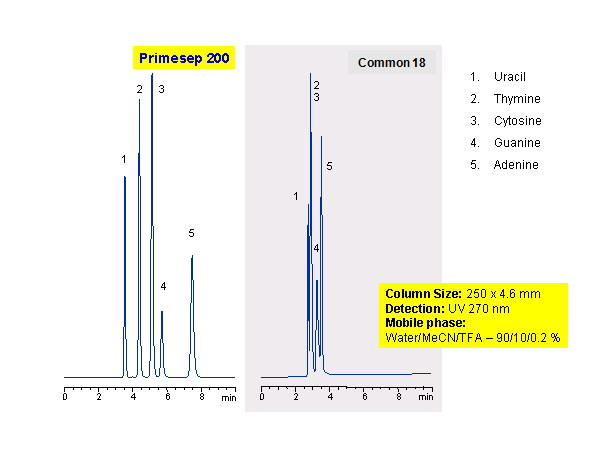 Nucleotide bases are parts of DNA and RNA. Adenine and guanine are purine-bases; uracil, thymine and cytosine are pyrimidine-bases. In the view of chromatography these compounds are very polar and similar in properties. It is hard to obtain base line HPLC separation on traditional C18 as peaks of nucleotide bases co-elute even at low organic concentration. In this application nucleobases are well retained and separated on Primesep 200 mixed-mode column. Compounds are retained by weak reverse phase and weak ion-exchange mechanisms. This HPLC method can utilize UV, ELSD, and LC/MS detection.

Nucleic bases are biological compounds found in genetic molecules (DNA, RNA). They can be separated on an Obelisc N column, which offers very polar characteristics and can be used with positively or negatively charged groups. Closely-eluted adenosine and uridine can be further separated by simply adjusting the pH of the mobile phase. Mobile phase is water and acetonitrile (MeCN, ACN) with Ammonium Acetate as buffer. UV detection at 250nm.

Application Notes: Nucleosides glycosylamines consisting of nucleobase linked to ribose or deoxyribose sugar. Nucleoside are building blocks for DNA and RNA. These compounds are very polar in nature and contain groups available for hydrogen bonding interaction. A method for separation of cytosine and cytidine was developed based on the strong dependence of retention time to the mobile phase composition. The mobile phase consists of acetonitrile and methanol. Order of elution for compounds depends on the amount of acetonitrile and methanol. Our method is compatible with LC/MS and preparative chromatography, and can be used for separation of other nucleobases and nucleotides. Application Columns: SHARC 1, 3.2x100 mm, 5 um, 100A. To learn more about SHARC 1 columns click here. To order this column click here. To see more chromatographic separations check our web site. Application Compounds: Cytosine and Cytidine Detection Technique: UV, LC/MS