The neurotransmitters dl-DOPA, creatinine, hydroxytryptophan (5-HTP), and serotonin are separated in less than 4 minutes on a short 50 mm Primesep 200 column. The HPLC separation uses a mobile phase of water, acetonitrile (MeCN, ACN) and trifluoroacetic acid (TFA) and UV detection at 250 nm. Ion-pair reagents were not needed for retention of these polar, hydrophilic compounds, instead, a combination of ion-exchange and reversed-phase interactions were used. 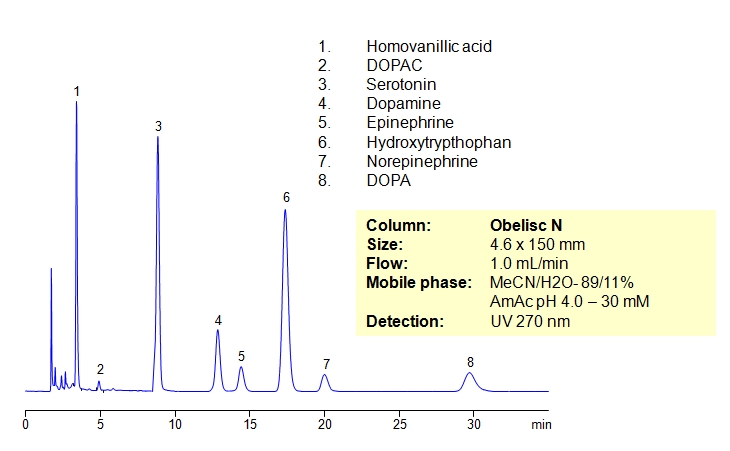 Catecholamines are chemical compounds derived from the amino acid tyrosine containing catechol and amine groups. Some of them are biogenic amines. Retention of compounds of the catecholamine pathway is achieved on Obelisc N column. All polar compounds are well retained by combination of HILIC and ion-exchange mechanisms. Obelisc N columns produce very good peak shapes for all analytes. The method is very sensitive to amount of ACN, buffer and buffer pH. The retention time changes with variation of the main parameters. This method can be used for quantitation of biogenic amines and related compounds (homovanillic acid, dihydroxyphenyl acetic acid, serotonin, dopamine, epinephrine, hydroxytryptophan, epinephrine and DOPA) in urine, blood and other biological fluids. Further optimization of this HPLC method can be used during screening and validation. Amines and acids can be analyzed in the same run and retained by a combination of polar organic mode, cation-exchange and anion-exchange modes. Various buffers within specified pH can be employed (ammonium formate, ammonium acetate, sodium phosphate, etc.). 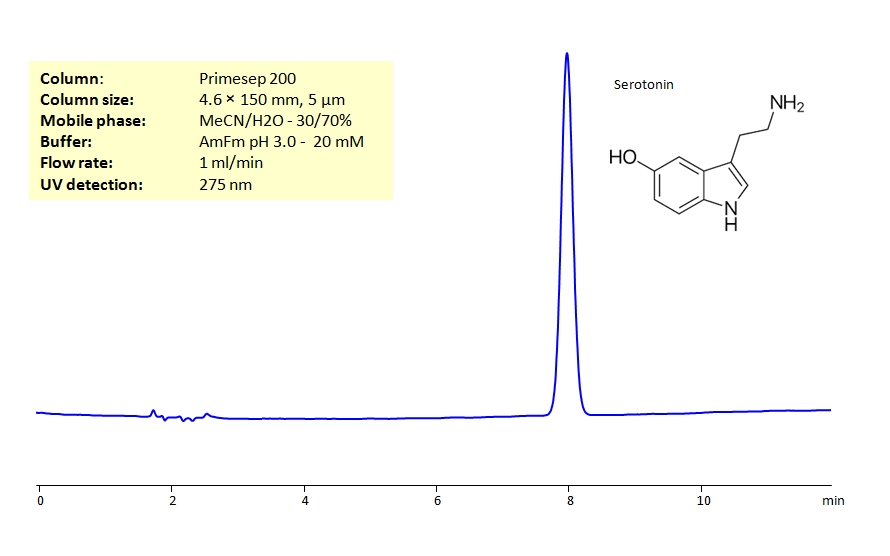 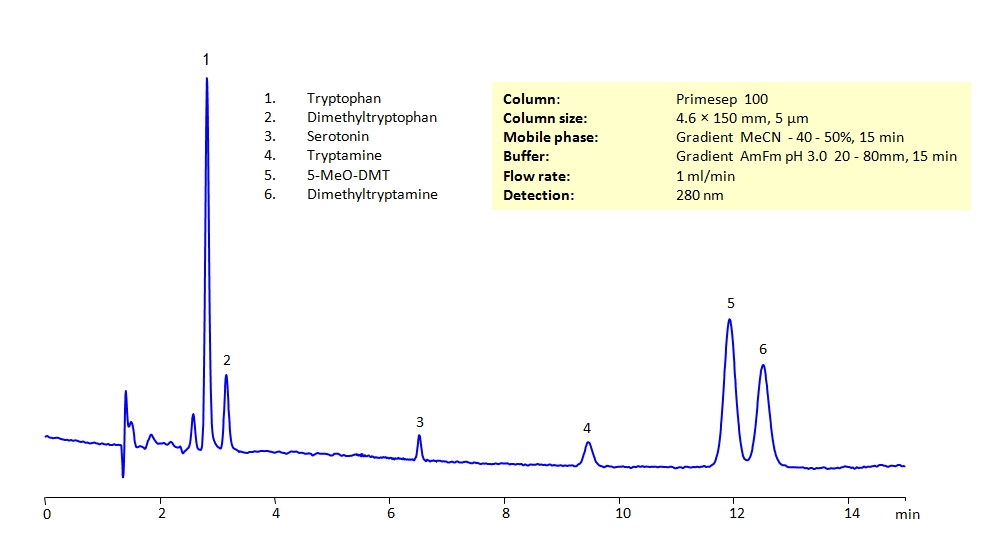 Tryptophan is an essential amino acid used in the synthesis of proteins. Tryptamine is structurally similar to tryptophan. Serotonin is a neurotransmitter derived from tryptophan. Dimethyltryptamine and 5-MeO-DMT are psychedelic substances derived from tryptamine. All the compounds have similar structures and can present difficulties to separation in reverse-phase HPLC. They can be separated using the Primesep 100 mixed-mode column in gradient analysis with acetonitrile (ACN) and water mobile phase with ammonium formate (AmFm) buffer, making the method MS-compatible. The amines can also be UV detected at 280nm.