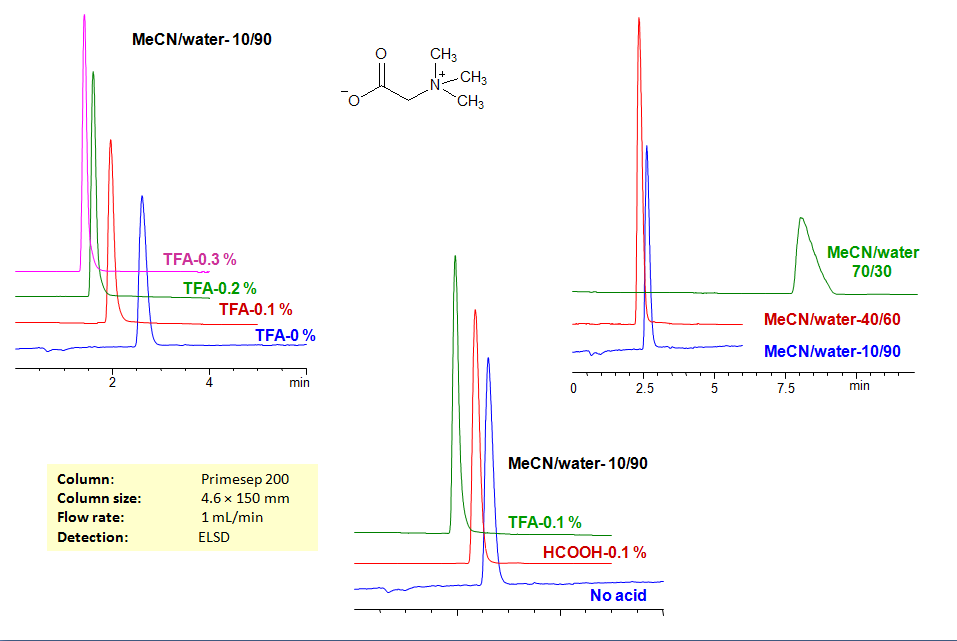 The retention of the zwitterion betaine on Primesep 200 demonstrates the tunability of Primesep columns. Retention of betaine is altered by acid type, amount of acid in the mobile phase, and the amount of organic solvent. Typical reversed-phase columns do not show this tunability with simple mass spec compatible mobile phases of water, acetonitrile (MeCN, ACN) and trifluoracetic acid (TFA) with evaporative light scattering detection (ELSD).

Primesep A retains the hydrophilic zwitterion tricine by a combination of polar interactions and ion exchange. Tricine is not retained by traditional reversed-phase chromatography. The retention on Primesep A is adjustable by changing the concentration of TFA in the mobile phase. Excellent peak shape results with a mass spec compatible mobile phase of water, acetonitrile (MeCN, ACN) and trifluoracetic acid (TFA) with evaporative light scattering detection (ELSD).

HPLC Separation of Acidic, Basic and Zwitterionic Compounds on Special Columns for Retention of Polar Compounds

Primesep mixed-mode columns are designed to separate basic, acidic, neutral and zwitter-ionic compounds. Elution of these compounds is facilitated by acetonitrile and ions in the mobile phase. In all cases the retention time on mixed-mode columns is significantly longer than on traditional reverse-phase columns. Presence of cation-exchange mechanism in Primesep 100 column allows to achieve better retention and peak shape for analytes like phenylalanine and benzylamine. Various buffers can be used along with different detection techniques. This HPLC method can be adopted as a universal approach for analysis of basic, acidic and zwitter-ionic compounds in complex mixtures and formulations. Compounds can be monitored by UV, ELSD, CAD and LC/MS.

Taurine (2-aminoethanesulfonic acid) is organic zwitterionic compound. Taurine is a non-essential sulfur-containing amino acid that functions with glycine and gamma-aminobutyric acid as a neurotransmitter. Taurine is incorporated into one of the most abundant bile acids, chenodeoxycholic acid, where it serves to emulsify dietary lipids in the intestine, promoting digestion. It is used in food and pharmaceutical formulations. High polarity and zwitterionic nature of taurine complicates analysis of this compound by reverse-phase chromatography. Two methods for the analysis of taurine are developed on mixed-mode columns. Taurine is retained on Primesep A column by HILIC cation-exchange mechanism and on Primesep D column by HILIC anion-exchange mechanism. Method can be used for fast and effective quantitation of taurine in various products including energy drinks. Method requires ELSD or LC/MS detection due to lack of UV activity for taurine.

MOPS and MES are buffers used in biology and biochemistry. They consist of a morpholine ring and propanesulfonic acid. Both molecules are zwitter-ionic and very polar. No retention can be achieved on reversed-phase columns. MOPS and MES are analyzed in HILIC mode on a Primesep N HPLC column. Other biological buffers can be analyzed with this general method. Biological buffers are not UV active and can be monitored by ELSD, CAD or LC/MS.

GABA (neurotransmitter) and its isomers are polar zwitter-ionic compounds. Due to the position of amino-groups, all three compounds show different polar and basic properties. The isomers of aminobuturic acid are separated on an Obelisc N HILIC/cation-exchange column. Buffer concentration has a different effect on retention of alpha-, beta-, and gamma-aminobutyric acid. This general and robust method can be used for separation of other polar and ionizable compounds and isomers by mixed-mode chromatography.

Effect of Buffer on HPLC Separation of Buffers

HEPES, CAPS, MES and MOPS are zwitterionic organic chemical buffering agents. These are very polar compounds which are not retained by traditional reverse phase chromatography. These compounds are zwitterions in nature and can be separated by mixed-mode hydrophilic interaction chromatography on Obelisc N column. Retention is achieved by combination of HILIC and ion-exchange mechanisms. These buffering agents do not have UV active groups, but can be analyzed with ESLD, LC/MS, and CAD detection.

Glutamic acid and GABA are neurotransmitters. Glutamic acid and GABA are non-essential amino acids. They are hydrophilic and zwitter-ionic in nature . At lower pH, carboxylic acid groups of amino acids are not ionized, making them more hydrophobic and basic. Underivatized glutamic acid and GABA were retained and separated on a Primesep 100 column using ACN/water/TFA mobile phase. Amino acids can be monitored by low UV or ELSD/CAD. Retention is provided by reversed-phase and cation-exchange mechanism. Method can be used for analysis of underivatized amino acids in various matrices including supplements, vitamin and other complex mixtures. various mobile phase can be used with corresponding detection techniques.

Taurine, or 2-aminoethanesulfonic acid, is a very polar zwitter-ionic compound. Taurine is used as an additive for various nutrition composition. The polar and zwitter-ionic nature of taurine prevent it from analysis by RP chromatography, in addition to that, taurine is not UV active and cannot be monitored by UV. The analytical method for analysis of taurine was developed on the Obelisc N HILIC/mixed-mode column. This method with some modifications can be used for the analysis of taurine in complex mixtures with a ELSD or a LC/MS detector.