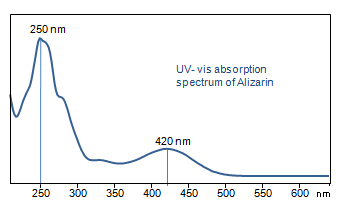 HPLC Method for Analysis of Dyes 3-Aminoacridine is an aminoacridine. Alizarin a red pigment that comes as a red powder with a slight orange tint. When dissolved it appears bright red with a slight pink undertone. Alizarin is also known as Mordant Red 11 or Turkey Red. Eosin Y is a pigment that comes as an orange powder that when dissolved in water turns bright orange. Eosin is a fluorescent staining agent. It is used to stain red blood cells, proteins on cytoplasm, collage, and muscle fibers. It is also fluorescence. Fluorescein is a dye that comes in a dark orange powder and is used as a tracer and an indicator. As it says in the name, it is also Fluorescent, obtaining a green-yellow color when under black light. Methyl red an indicator that turns red in acidic solutions (below 4.4 pH), is a shade of orange between 4.5 and 6.1 pH, and turns bright yellow in basic solutions (above pH 6.2). Nile blue, also known as Nile blue A, is used as a stain used in biology and histology as well as a pH indicator. In pH below 7 it becomes lighter shades of glue, and at pH 0 becomes almost completely translucent. At pH of seven it has a dark blue shade, while at pH higher than that it starts becoming more red. Pararosaniline Hydrochloride, also known as Basic Red 9, or C.I. 42500. It is a a magenta solid that is used as a dye. Patent Blue Violet, also known as Patent Blue, is a deep blue pigment that is often used to dye clothes. Resazurin is a blue dye as well as a pH indicator. At pH 3.8 or lower, it is bright orange, but the higher the pH the more blue it becomes, the color stops changing at the pH of 6.5 where it becomes indigo. Newcrom R1, a column that takes advantage of the newest technologies, does not contain embedded acidic nor basic ionizable groups and can retain dyes. The method is UV compatible and can be used as a general approach for analyzing similar compounds. 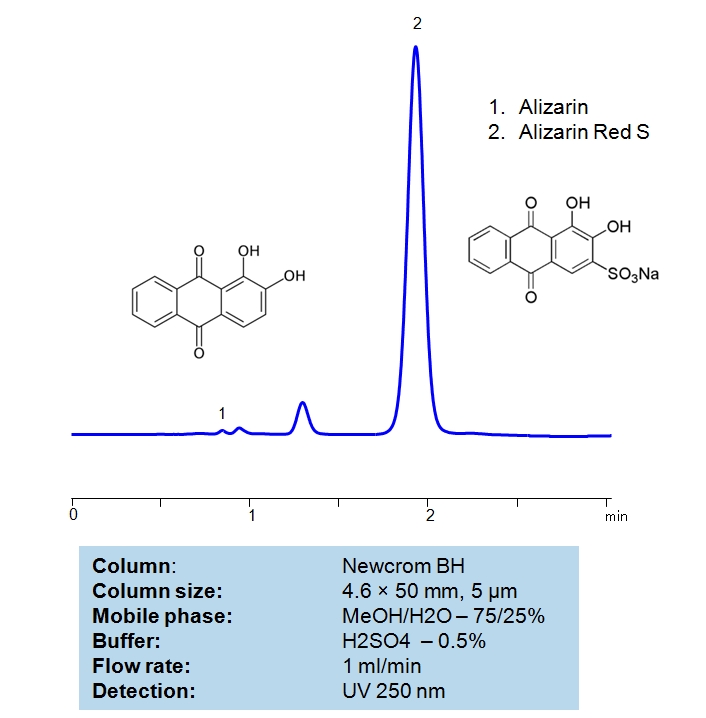 Alizarin and Alizarin Red S are both dyes with applications in locating calcium deposits in tissues. They differ in Alizarin Red S having an additional sulfonic acid group. They can be separated in HPLC using a Newcrom BH mixed-mode column using a mobile phase of methanol (MeOH) and water and sulfuric acid (H2SO4) as a buffer. UV detection at 250nm.