HPLC Separation of Lactic Acid and Its Oligomers

Lactic acid (milk acid) is natural organic acid that plays an important role in biochemical processes. It has carboxylic and hydroxy-groups which upon standing can react with each other and form dimers, trimers and higher oligomers. Lactic acid is a polar molecule that produces no retention on reversed-phase column. Primesep B2 mixed-mode anion-exchange column is used for the separation of lactic acid and its oligomers by a combination of weak reversed-phase and anion-exchange mechanisms. Oligomers of lactic acid can be converted to lactic acid by hydrolysis. Primesep B2 column can be used for the analysis of lactic acid alone and lactic acid in the mixture of oligomers. Lactates can be monitored by low UV, ELSD or LC/MS. In case of ELSD, CAD or LC/MS, phosphoric acid in the mobile phase needs to be replaced with buffer compatible with these detection techniques (ammonium formate or TFA).

Ascorbic, methylmalonic and succinic are weak organic acids. Retention of these three acids is achieved on Primesep N column in HILIC mode using acetonitrile/water and ammonium acetate. Compounds are monitored by ELSD. Method can be used for determination of ascorbic acid (Vitamin C), methylmalonic acid and succinic acid in various matrices. Other polar organic acids can be analyzed on this HILIC column. 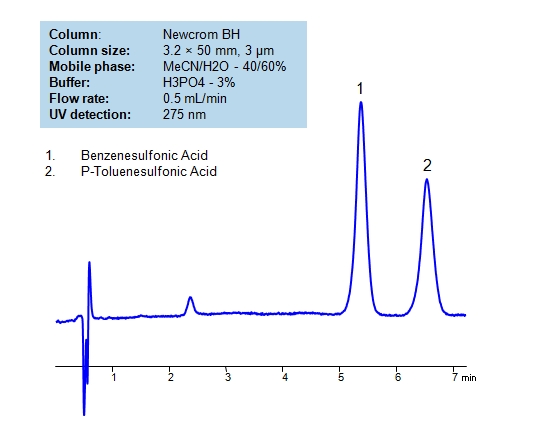 Organic and inorganic acids can be separated by reversed-phase anion-exchange Primesep D column. Succinic and methylmalonic acids were separated based on their hydrophobic and ionic properties. Method can be used for analysis of other acids by HPLC. 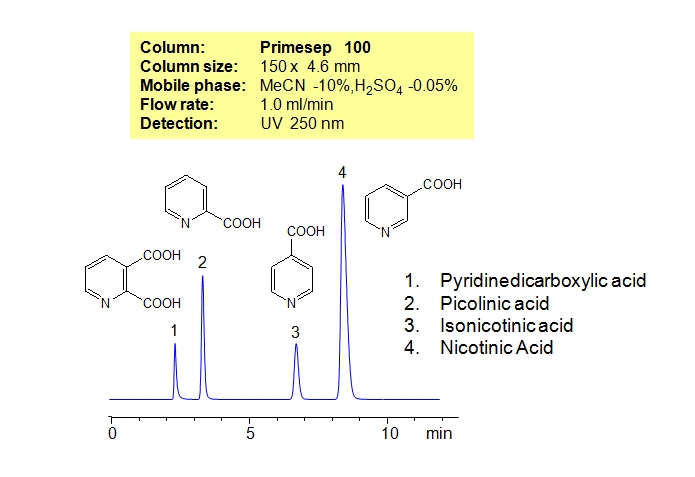 Organic and inorganic acids and ions can be separated on a Primesep B4 column based on their ionic properties. Method can be used for quantitation of residual acids in various products and sample matrices. Trifluoracetic, hydrochloric, methanesulfonic, and nitric acids are separated using ACN-water-ammonium formate. Ions can be detected by ELSD, CAD or LC/MS.

Obelisc N column are used for separation of weak and strong organic acids in mixed-mode HILIC. Benzoic and naphthalenesulfonic acids are retained based on polar interaction mode and anion-exchange mode. Order of elution and retention pattern can be changed by modifying mobile phase. PH of the mobile phase changes ionization state of stationary phase and analytes. Fast quantitation method for benzoic and naphthalenesulfonic acid can be developed using UV, ELSD or LC/MS detection. HPLC Method can be used for mixture of organic and inorganic strong and weak acids.

Separation of Maleic and Succinic Acid on Primesep B2 column

Organic and inorganic acids can be retained and separated on mixed-mode columns based on weak reversed-phase and weak/medium anion-exchange mechanisms. Amount of ACN, buffer concentration and buffer pH will affect retention time of organic and inorganic acids. Acids can be monitored by low UV, ELSD or LC/MS. Presence of ions is required to facilitate ion-exchange mechanism. Method can be used as a general approach for analysis of acidic hydrophilic and acidic hydrophobic compounds. Carboxylic acids along with inorganic acid can be retained and separated without ion-pairing reagent. 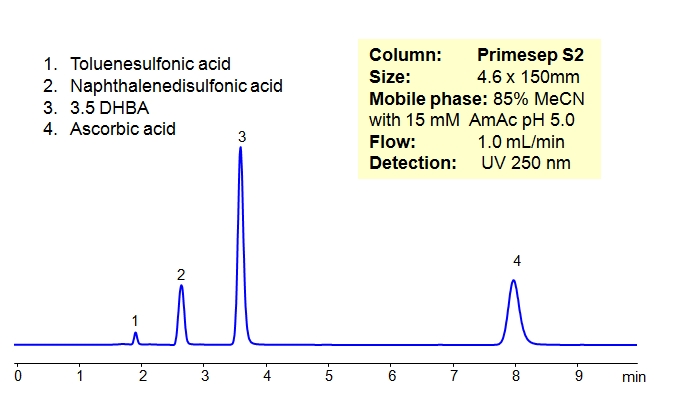