Primesep B separates tertiary amines, such as cetylpyridinium with symmetrical peak shape by a combination of reversed-phase and ion-exclusion mechanisms. The embedded basic functional group on the stationary phase shields the underlying silanols to prevent peak tailing. Retention time can be changed by changing either organic content or acid content in the mobile phase. C18 reversed-phase columns do not typically show this tuning ability with acid content. Excellent peak shape results with a mass spec compatible mobile phase of water, acetonitrile (MeCN, ACN) and trifluoracetic acid (TFA) with UV detection at 250 nm.

Surfactants are molecules that contain both hydrophilic and hydrophobic groups, usually in the form of a hydrophilic head and a hydrophobic tail. Surfactants are used in detergents where they can form micelles around hydrophobic dirt molecules and wash them away. Triton X-100 is a surfactant with a hydrophilic polyethylene oxide chain that can be separated on a Primesep D reverse-phase HPLC column based on the number of oxide units in the chain. The mobile phase is water, acetonitrile (MeCN, ACN) and sulfuric acid as buffer. UV detection at 210nm.

HPLC Separation of Chlorhexidine and Cetylpyridinium Chloride on Primesep B Column 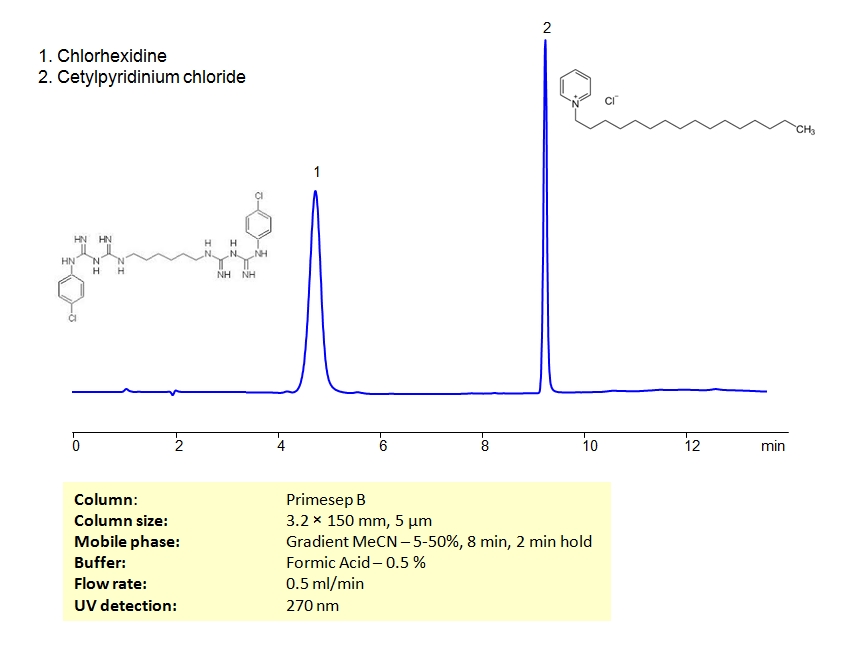 Chlorhexidine gluconate, or simply chlorhexidine, is a biguanide used as an antiseptic and disinfectant. It is a component of mouthwash rinses that has been shown to reduce plaque, gingivitis and oral bacteria. It’s also used as a topical agent for skin disinfection. Cetylpyridinium chloride is another type of antiseptic used in mouthwash rinses. Both compounds are cationic. They can be separated using HPLC on SIELC’s reverse-phase (RP) mixed-mode Primesep B column with the mobile phase of acetonitrile (ACN) and water with formic acid buffer and UV detected at 270nm.