Dextromethorphan is used as a temporary cough suppressant in many medications. The elution time of dextromethorphan and bromide can be reversed in HPLC chromatography on a Primesep B2 reverse-phase (RP) column with embedded basic ion-pairing groups by only changing the concentration of buffer in a simple mobile phase of water and acetonitrile (MeCN, ACN). Buffer is trifluoroacetic acid (TFA). UV detection at 210nm.

NyQuil is a cough medication produced by Procter&Gamble. It consists of acetaminophen, pseudoephedrine, doxylamine and dextromethorphan. Most of the analytical HPLC methods include either use of ion-pairing reagent or a gradient elution. Mixed-mode chromatography allows to replace long gradient method with short isocratic method. All four compounds are well separated within 3-5 minutes. Methods can be optimized for analysis of other cough composition containing general cough suppressants and pain killers. Method is robust and being validated at several drug companies.

Mixed-mode chromatography allows to separate various hydrophobic and hydrophilic drugs in one HPLC method. Presence of at least two mechanism of retention allows adjust selectivity of separation by changing three parameters: amount of acetonitrile, buffer concentration and buffer pH. Seven common drugs are separated on a Primesep C trimodal HPLC column in gradient method. Method provides alternative selectivity to traditional reversed-phase chromatography. Operational range in which basic compounds are retained the most is from pH 3 to 5. At higher pH, longer retention can be achieved. Mixed-mode chromatography provides longer retention and better peak shapes for basic and acidic analytes. Method can be used in analysis of drugs and pharmaceuticals.

Common hydrophobic basic and hydrophilic basic drugs are separated by mixed-mode chromatography with greater selectivity and resolution than traditional reversed-phase column. Drugs are retained by combination of reversed-phase and cation-exchange mechanisms. Retention time is controlled by amount of acetonitrile, buffer concentration and buffer pH. Available detection techniques are based on buffer selection and include UV, Evaporative Light-Scattering Detector (ELSD), Corona (CAD), LC/MS, etc. This HPLC method can be adopted as general approach for analysis of drugs and pharmaceuticals.

Separation of Drugs in Mixed-Mode HPLC

Obelisc R column can be successfully used for analysis of hydrophobic and hydrophilic basic and acidic drugs and corresponding counter-ions. This approach can be used for analysis of various cold and cough composition, pain killers, and other prescription and over-the-counter medications. Within pH 3-5, both cation- and anion mechanism are present on the column, along with hydrophobic interaction. Selectivity of this mixed-mode separation is controlled by the amount of acetonitrile, buffer concentration and buffer pH. Method is robust and reproducible, and can be used as a common HPLC method for analysis of drug molecules and compositions.

HPLC Separation of Drugs in Advil Allergy and Sinus

Ibuprofen is in a group of drugs called non-steroidal anti-inflammatory drugs (NSAIDs). Ibuprofen works by reducing hormones that cause inflammation and pain in the body.
Pseudoephedrine is a decongestant that shrinks blood vessels in the nasal passages. Dilated blood vessels can cause nasal congestion (stuffy nose).
The combination of chlorpheniramine, ibuprofen, and pseudoephedrine is used to treat sneezing, itching, watery eyes, runny nose, stuffy nose, sinus congestion, cough, and pain or fever caused by the common cold or flu in common over-the-counter medication (Advil, NyQuil, Tylenol, etc.)
Active ingredients of Advil Allergy and Sinus composition are separated by combination of reverse phase, cation-exchange and anion exchange mechanisms. Obelisc R mixed-mode column is used to separate pseudoephedrine (polar basic compound), chlorpheniramine (hydrophobic basic compound), ibuprofen (hydrophobic acidic compound) and maleic acid (counter-ion, hydrophilic acid compound). Method can be used for QC in production, impurity profiling and research and development. All compounds are well separated with high efficiency and good peak shape. Method uses ammonium formate buffer but other buffers can be used as well (ammonium acetate, sodium and ammonium phosphate) with corresponding detection technique - ELSD, LC/MS, and UV. Chlorpheniramine is an antihistamine that reduces the natural chemical histamine in the body. Histamine can produce symptoms of sneezing, itching, watery eyes, and runny nose.

HPLC Analysis of Drugs in Saliva

The presence of three drugs, dextromethorphan, amitriptyline and trimipramine in saliva were analyzed by mixed-mode chromatography on a Primesep D reversed-phase anion-exchange column. No sample preparation is required as proteins from saliva are not retained at these conditions and elute in the void of the column due to cation-exclusion effect. Both column and proteins are positively charged at current conditions. Mobile phase consists of ACN-water-formic acid and is compatible with LC/MS detection technique. This general HPLC method can be used for analysis of hydrophobic basic drugs in biofluids. 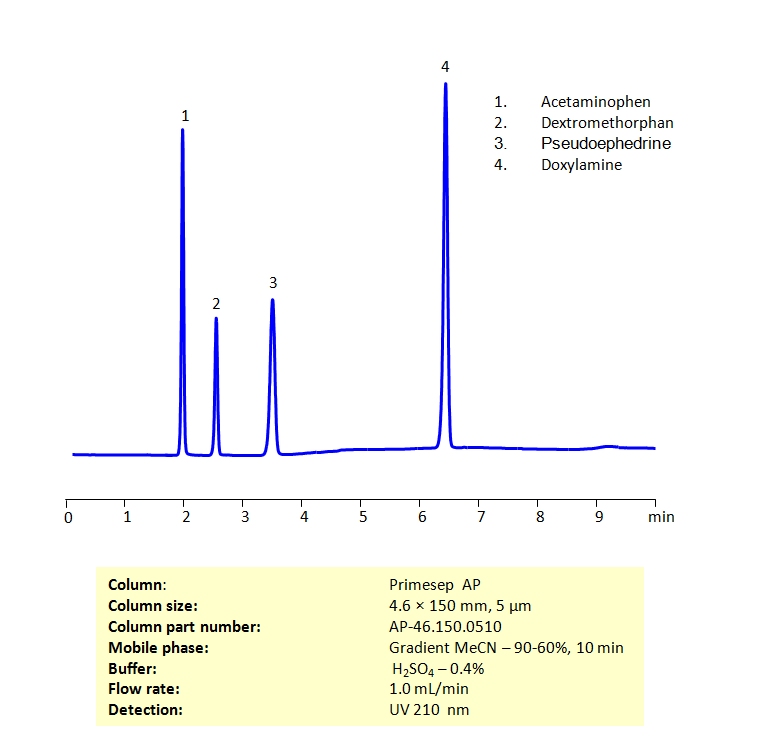 High Performance Liquid Chromatography (HPLC) Method for Analysis of Acetaminophen, Dextromethorphan, Pseudoephedrine, Doxylamine
Nyquil is a combination of medicines used to treat headaches, fever, body aches, cough, runny nose, sneezing, and sore throat caused by allergies, the common cold, or the flu. Nyquil contains the active ingredients acetaminophen, dextromethorphan HBr, doxylamine succinate, and sometimes, phenylephrine HCl. Acetaminophen is a pain reliever and fever reducer. Dextromethorphan is a cough suppressant. It affects the cough reflex in the brain that triggers coughing. Doxylamine is an antihistamine that reduces the effects of the natural chemical histamine in the body. Histamine can produce symptoms of sneezing, itching, watery eyes, and runny nose. Pseudoephedrine is used to relieve nasal congestion caused by colds, allergies, and hay fever. It is also used to temporarily relieve sinus congestion and pressure. All active compounds of Nyquil can be separated in HPLC on a Primesep AP mixed-mode column. The analytical method uses acetonitrile (ACN) gradient and water with sulfuric acid (H2SO4) as buffer and UV detected at 210 nm.