Acetaminophen is an over-the-counter pain and fever reducer, and a major component of cold and flue remedies. Phenylephrine is a decongestant. Guaifenesin is a mucolytic agent used to relieve respiratory difficulties. These three compounds of cough medication were separated by mixed-mode chromatography on a Primesep C HPLC column. Retention and order of elution for phenylephrine can be changed by buffer concentration and buffer pH. Method can be used for analysis of cough and cold composition during the production and in QC/QA environment. Method is compatible with LC/MS and can be used to analyze these components in biological fluids. This generic HPLC method is robust and reproducible.

Method for separation of components of cough medication shows how retention for acetaminophen, phenylephrine and guaifenesin is controlled. Order of elution for compounds can be changed based on composition of the mobile phase. The method is compatible with UV, ELSD and LC/MS and can be used for quantitation of drugs in formulation. Primesep C mixed-mode HPLC column is ideal candidate for analysis of cough compositions. Basic compounds are well retained in mixed-mode chromatography without use of ion-pairing reagents. Several companies validated this approach. The method is reproducible and robust and can be used in both production environments and R&D. This HPLC method can be adopted as general approach for analysis of basic compounds in various mixtures.

HPLC Separation of Caffeine and Phenylephrine

Caffeine and phenylephrine are some of the components of various pain killer/fever reducers/cough compositions. In this application, both of these compounds are separated on Primesep 100 and Primesep 200 columns. Caffeine is retained by reversed-phase mechanisms and phenylephrine is retained by combination of reversed-phase and cation-exchange mechanisms. Retention time for caffeine is controlled by the amount of acetonitrile, while retention time of phenylephrine is controlled by amount of the acetonitrile, buffer concentration and buffer pH. The method can be used for analysis of components of pain, cough and cold medication in pharmaceutical production. Method is robust and reproducible and provides good retention and peak shape. Compounds are monitored by UV, ELSD, CAD or LC/MS. Analysis of active components on biofluids (urine, plasma, blood, etc) is possible with additional sample preparation (protein precipitation, SPE, etc.)

Epinephrine and norepinephrine (adrenaline and noradrenaline) are hormones and neurotransmitters. Epinephrine is synthesized from norepinephrine in a synthetic pathway shared by all catecholamines, including L-dopa, dopamine, norepinephrine, and epinephrine. Phenylephrine is used as a decongestant, available as an oral medicine or as a nasal spray. Phenylephrine is now the most common over-the-counter (OTC) decongestant. All three compounds are used in various drug compositions. Separation of epinephrine and norepinephrine is a challenging task due to polarity and close properties of two compounds. Epinephrine, norepinephrine and phenylephrine are separated in this method on Obelisc R mixed-mode HPLC columns. The method is very sensitive to variation of pH and pH adjustment can be used to achieve desired selectivity and retention time. Other catecholamines can be analyzed using this HPLC method. The method can be used as a stability indicating or a impurity profiling approach to the analysis of neurotransmitters in drug formulation, blood, serum and urine.

HPLC Method for the Determination of Acetaminophen, Phenylephrine, and Ascorbic Acid on Primesep S Column 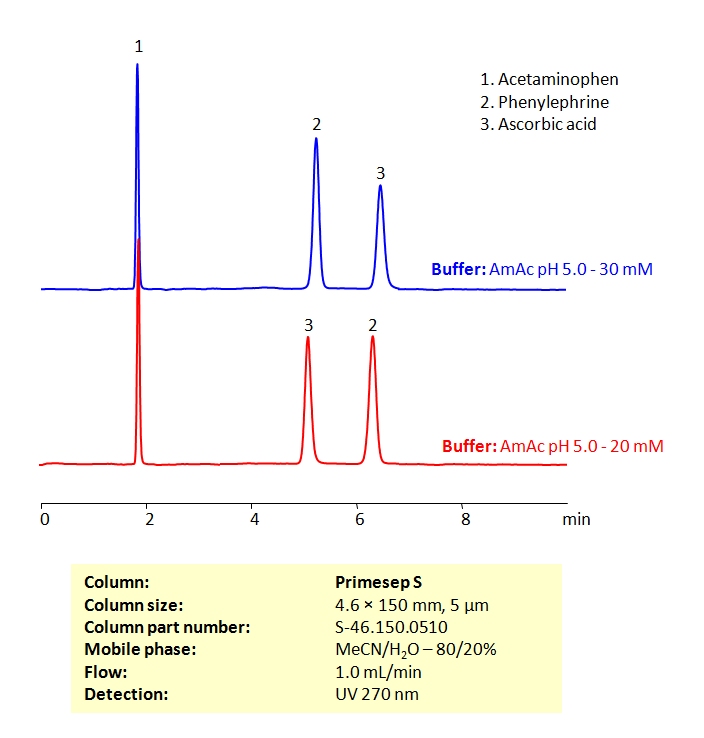 HPLC Method for the Determination of Acetaminophen, Phenylephrine, and Ascorbic Acid on Primesep S2 Column 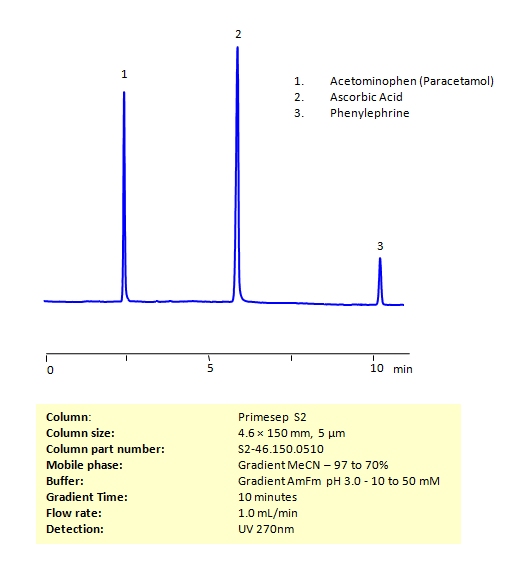 High Performance Liquid Chromatography (HPLC) Method for Analysis of Acetaminophen, Phenylephrine, and Ascorbic Acid
Acetaminophen (or paracetamol) is one of the most popular over-the-counter painkillers all over the world (in the US it is best known under the brand name Tylenol). Ascorbic acid (also known as Vitamin C) helps your body build up muscle, cartilage, and other important building blocks in your body. Phenylephrine is a common over-the-counter decongestant, but can also be used for pupil dilation and hemorrhoid treatment. While all of these compounds are available at your local pharmacy, Vitamin C intake can reduce the body’s ability to break down acetaminophen. All three of these compounds can be measured at low UV. Using a Primsep S normal phase column and a mobile phase consisting of water and acetonitrile (MeCN) with an Ammonium acetate (AmAc) buffer, these three compounds can be separated and UV detected at 270 nm. Varying the buffer concentration changes the order in which phenylephrine and ascorbic acid are retained. This method is compatible with Mass Spectrometry.