Ascorbic, methylmalonic and succinic are weak organic acids. Retention of these three acids is achieved on Primesep N column in HILIC mode using acetonitrile/water and ammonium acetate. Compounds are monitored by ELSD. Method can be used for determination of ascorbic acid (Vitamin C), methylmalonic acid and succinic acid in various matrices. Other polar organic acids can be analyzed on this HILIC column.

Organic and inorganic acids can be separated by reversed-phase anion-exchange Primesep D column. Succinic and methylmalonic acids were separated based on their hydrophobic and ionic properties. Method can be used for analysis of other acids by HPLC.

HPLC Application for Analysis of Sodium Succinate on Primesep 100

Succinic acid is a dicarboxylic acid that plays important role in citric acid cycle. Succinic acid is byproduct of sugar fermentation, and is present in wines and beer. In one of the forms it exists as a salt with sodium. Both sodium and succinic acid can be retained and separated on Primesep 100 column. Sodium is retained by cation-exchange mechanism, while succinic acid is separated by reverse phase mechanism. Method can be used for HPLC analysis of metal ions (sodium, potassium, lithium, calcium, etc) and carboxylic acids (hydrophobic carboxylic mono and diacids) in one chromatographic run. ELSD is detection of choice for non-UV active non-volatile compounds.

Effect of both pH and Organic Content on a Separation of Sugars, Amino Acids, and Carboxylic Acids

In mixed-mode HILIC chromatography, selectivity of separation can be adjusted by amount of acetonitrile, amount of buffer and buffer pH. Buffer concentration and pH will affect retention of ionizable compounds to a different degree. Retention of neutral compounds can be adjusted by the amount of acetonitrile. Carboxylic acid, three amino acids and two sugars are separated by combination of HILIC and ion-exchange mechanisms. Compounds can be monitored by ELSD, Corona (CAD), LC/MS or low UV. UV-transparent mobile phase /buffer is required for UV monitoring of this mixed-mode separation. This HPLC method can be adopted as general approach for analysis of sugars, amino acids and carboxylic acids.

Separation of Maleic and Succinic Acid on Primesep B2 column

Organic and inorganic acids can be retained and separated on mixed-mode columns based on weak reversed-phase and weak/medium anion-exchange mechanisms. Amount of ACN, buffer concentration and buffer pH will affect retention time of organic and inorganic acids. Acids can be monitored by low UV, ELSD or LC/MS. Presence of ions is required to facilitate ion-exchange mechanism. Method can be used as a general approach for analysis of acidic hydrophilic and acidic hydrophobic compounds. Carboxylic acids along with inorganic acid can be retained and separated without ion-pairing reagent.

HPLC Separation of Succinylcholine and Choline Using a Primesep 200 Column 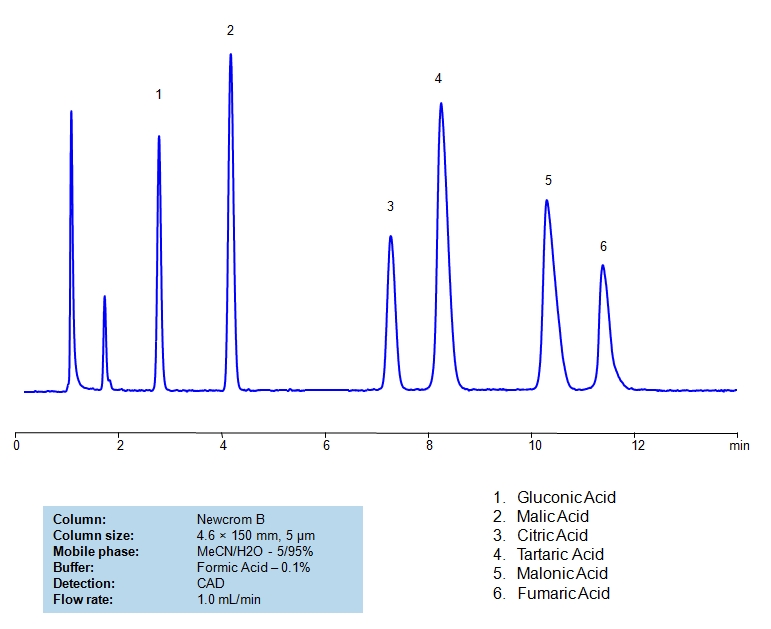 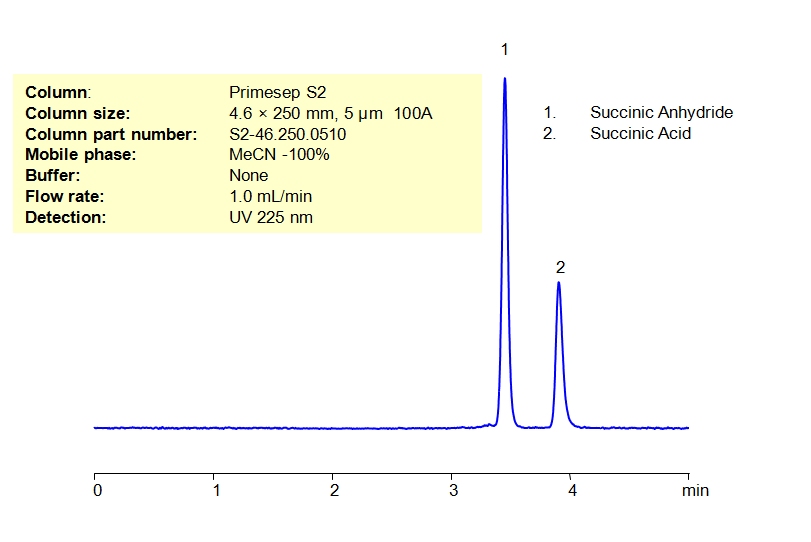 High Performance Liquid Chromatography (HPLC) Method for Analysis of Succinic Anhydride and Succinic Acid
Succinic acid is a key intermediary (in the form of its anion, succinate) in the electron transport chain, a process that is the key power source for our cells. It also has a few limited functions outside of the mitochondria. Succinic anhydride, its acid anhydride, is a colorless, crystalline compound used often in the production of polymer resins, often of the alkyd variety. It also has the ability to increase the solubility of various proteins and has other benefits for the pharmaceutical, flavor, and fragrance industries. These two related compounds can be detected in the low UV regime. Using a Primsep S2 HILIC column, which uses hydrogen-bonding as a separation mechanism, and a mobile phase consisting of water and an acetonitrile (ACN) gradient with no buffer, both of these compounds can be separated and retained. This analysis method can be UV detected at 225 nm. 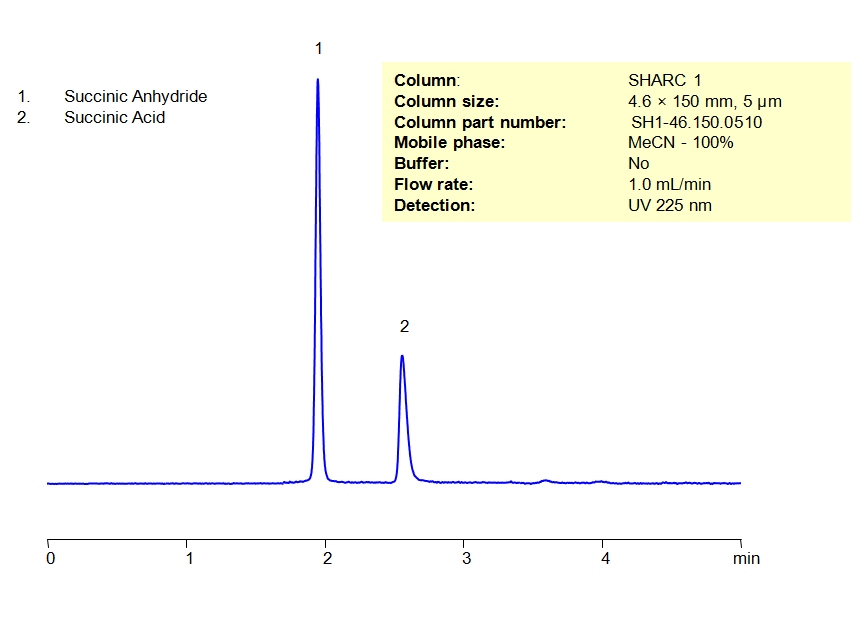 High Performance Liquid Chromatography (HPLC) Method for Analysis of Succinic Anhydride and Succinic Acid
Succinic acid is a key intermediary (in the form of its anion, succinate) in the electron transport chain, a process that is the key power source for our cells. It also has a few limited functions outside of the mitochondria. Succinic anhydride, its acid anhyrdie, is a colorless, crystalline compound used often in the production of polymer resins, often of the alkyd variety. It also has the ability to increase the solubility of various proteins and has other benefits for the pharmaceutical, flavor, and fragrance industries. Succinic Anhydride and Succinic Acid can be detected in the low UV regime. Using a SHARC 1 hydrogen-bond column and a mobile phase consisting of only acetonitrile (and without a buffer), these two compounds can be separated, detected, and analyzed. This analysis method can be UV detected at 210 nm.


*Before running, wash the column using 0.5 % phosphoric acid in water and run this MP for a couple of hours. Then switch to pure MeCN.